Did someone just say coffee? Mmmm yum yum! The mere mention of the word is enough to make my taste buds start tingling. It’s as though my brain cells can sense its presence and start dancing this crazy joyous jig, together with that intoxicating divine smell of freshly filtered coffee, makes me feel almost HEAVENLY! There’s something rather magical about that freshly brewed brown/black liquid, that delicious  concoction that brings a caffeinated joy that only coffee can give.

Coffee is that sole beverage which is considered somewhat of a comfort food or should I say drink and is popular among the masses, irrespective of age, gender, religion or culture. It is consumed daily on a humongous scale throughout the globe especially in the USA.  Some would argue that coke and tea are just as well-known and widely favoured, but I beg to differ-Tea is barely popular among kids and coke is forbidden for those suffering from diabetes– In addition I must also point out that coffee is now added to cakes, muffins, toffee, ice-cream and even chocolate. Taken cold, hot or however your heart desires. In comparison, ever heard of tea flavoured cake? Or even tea flavoured ice-cream? I doubt it.

Personally I absolutely refuse to call myself a coffee addict, (my mother would say otherwise) though one mug per day is mandatory for my little body to function at its best. Be it freshly ground filter coffee, Brazil’s best instant ground beans in a jar or a little sachet of some unknown brand packed up with powdered milk and sweetener, I’ll hungrily gulp it all down.

Let’s rewind a few years .I was 17, sick of tea and in dire need of something to keep me perked up and focused during the long endless nights of college exam prep. Coffee presented itself to me in the form of a beautiful steaming hot mug full of deliciousness. That’s when my love for it really began. Almost three years down the line, we’re as inseparable as a newly wedded couple. 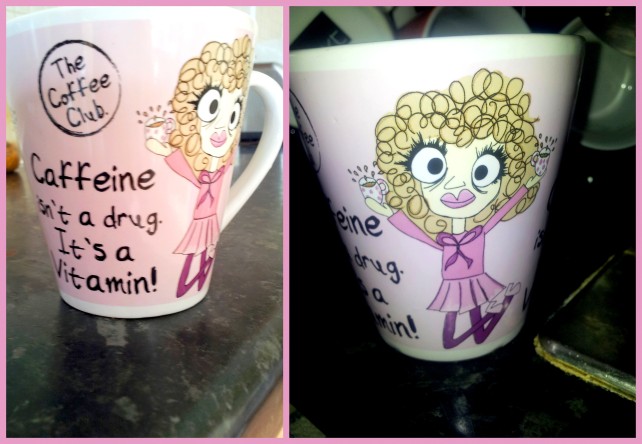 My very own special coffee mug-A present from my mum.I love it to bits! 🙂

Back then, my mother had this inconceivable notion that if I were to continue having coffee I would not only develop stomach ulcers but would also tragically die of intestinal rupture. No exaggerations there (I think I have succeeded in reassuring her now).She even used to go as far as hiding the jar of coffee or else putting it on a shelf beyond my reach, some place she thought I’d be innocent enough to overlook. But not me, no. I was never that easily fooled. I would ransack the kitchen whenever she was out, hunt down that coffee jar and make myself comfortable while I sat watching the kettle boil. Then I’d sit back and enjoy my steaming cup of heaven, wash up my cup after I was done and creep out of the kitchen like a criminal. Turns out I’m not very good at hiding things, she used to come back and somehow know what I had done. Maybe it was just that guilty look on my face that made her suspicious!

I found this rather amusing!

However, despite my adoration for coffee I barely ever exceed one mug per day (excluding exam time of course, but extra is justified during that stressful period). My mother’s continuous warnings have finally hit their mark and I dare not surpass my limit for fear of those dreaded ulcers and burnt out intestines.

According to a recent study, on average 300mg of caffeine is safe for adult consumption on a daily basis. However this is also duly dependent upon the person’s weight and age as well as their general reaction towards caffeine.

I came across a number of articles while trying to prove to my mum that a mug full a day was perfectly safe (she’s a tea drinker, through and through). Clink on the links below if you’re interested. You might just find them useful.

How much coffee is safe?

What is a safe amount of caffeine

Till then, for all those coffee lovers out there, consider us soul-mates!